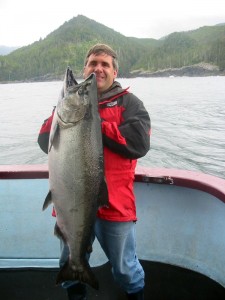 Season: May-July
The chinook is the largest of the Pacific salmon species, the world record standing at 57.27 kilograms (126 pounds). Chinook are also known as “spring” salmon because they return to some rivers earlier than other Pacific salmon species. This species is known as piscivorous, meaning that they eat other fish.

A favourite in the recreational fishery, the chinook salmon is known by many names: King, blackmouth, quinnat, and chub are all references to this powerful fish – with those over 14 kilograms (30 pounds) dubbed “Tyee”. Chinook are an unusual Pacific salmon species because the flesh of adults can range in colour from white through pink to deep red.

While still feeding in tidal waters, the chinook has a dark back, with a greenish blue sheen. As they approach fresh water to spawn, the body colour darkens and a reddish hue around the fins and belly develops. The teeth of adult spawning males become enlarged and the snout develops into a hook.

Season: July-September
Coho are swift, active fish. These salmon are found in most BC coastal streams and in many streams from California to Alaska, but their major territory lies between the Columbia River and the Cook Inlet in Alaska. Coho spawn in over half of the 1500 streams in BC and Yukon for which records are available.

Young coho generally spend one year in freshwater although in northern populations, high proportions of juveniles spend two or even three years in freshwater before entering the ocean. Juvenile coho favour small streams, sloughs and ponds, but coho populations can also be found in lakes and large rivers. After the eggs hatch in the gravel of stream beds, young coho spend one-two years rearing in freshwater. Migrating as smolts to the oceans, they spend up to 18 months in the sea before returning to their natal streams to spawn. While most coho salmon return to fresh water as mature adults at three years of age, some mature earlier and migrate to their home streams as jacks at only two years.

The best known Pacific salmon, sockeye are the most sought after for their superior flesh, colour and quality. Their rich oil content and red colour make them a favourite with the Canadian and international public.

The main spawning area of sockeye salmon extends from the Fraser River to Alaska’s Bristol Bay. Most sockeye in BC and the Yukon spawn in late summer or fall in lake-fed systems; at lake outlets, in lakes, or in streams flowing into lakes. Major spawning runs are found in the Fraser, Skeena, Nass, Stikine, Taku and Alsek watersheds as well as those of the Smith and Rivers inlets.

Young sockeye may remain in their freshwater nursery lakes for a year or more, with some waiting until the second or third year to make their seaward journey. Once in salt water, BC sockeye move north and north-westward along the coast. Their maturing years find them in a huge area of the Pacific Ocean extending west to approximately the International Date Line (2600 miles from the coast of Vancouver Island), north to the northern Gulf of Alaska and south to the Oregon-California border.

Season: June-September
An attractive fish, in tidal waters chum are metallic blue and silver, with occasional black speckling on the back. Spawning chum are readily recognized by the dark horizontal stripe running down their sides, the canine-like teeth of the large males and the checkerboard or calico colouration. Chum salmon are the most widely distributed of the Pacific salmon.

This species is found in streams and rivers from California north to the Mackenzie River, with their principal spawning areas between Puget Sound, Washington, and Bristol Bay, Alaska. They migrate to their home stream from July to October, and while some go a considerable distance upstream, the majority spawn in waters close to the sea. During the spawning period, both sexes change from their blue and silver colouring to a pale grey.

A peculiarity of this species is its fixed, two year lifespan. Immediately after they emerge from the gravel in the spring, the young pink fry enter the ocean and after a few days to several months in the estuary and nearshore zone, they move out into the open ocean in large schools. There, pink salmon feed on the small and nearly invisible animals called zooplankton, especially krill, which gives their flesh the bright pink colour for which they are named.

Despite their short life span and small size, the migrations of Pink salmon are extensive, covering thousands of kilometres from their home streams. During ocean feeding and maturing, pink salmon are dispersed throughout the Pacific Ocean from northern California to the Bering Sea. During fall and winter, pink salmon spend more time in the southern parts of their range.

CALL US TODAY!
QUESTIONS?
Check out our new fishing charter video!
SUBMIT A REVIEW
FAQs
The most spectacular salt water fishing off the rugged coast of British Columbia, Canada. Located in Prince Rupert.
Your Fishing License

Everything is included: meals, bedding, fishing tackle, bait, etc. All you are required to bring is your Tidal Sportfishing License. Apply for your license online here.